A little piece of history was made in Boston on the 4th of June when Hot Hotels [1]  become the first company from Spain to be accelerated by Techstars [2] in the USA.

Two of the four co-founders of the company are IE MBA graduates. Adelaida Muriel Galet [3] (MBA 2012) and Joseph Anthony Haslam [4] (MBA, 2004). Completing the team are CEO Conor O´Connor [5] who has a long history of starting Travel and Technology companies (Mydestinationinfo.com, Hoteles.es, Spansurf, Spantel)  and Jose Manuel Fernandez Muñiz [6] who was previously General Manager of  Muchoviaje [7]

Ade, who is the COO of the company, and will spend the entire 13 weeks of the intensive program in Boston until Demo Day on September 1st. Joe, who is the company Chairman, is currently skyping in to sessions but will go to Boston in August.

According to the Seed Accelerator Rankings, Techstars is ranked [8] as the number two accelerator in the USA. There is a less than 1% [9]acceptance rate and in accordance with a policy of transparency they publish year-by-year breakdowns [10] participating companies.

As Joe Haslam explained [11] in this interview in Novobrief, the main motivation was to get closer to the cluster of Travel Tech companies in the Boston area. Also the success of Kayak, Trip Advisor, ITA Software means that there are Venture Capital firms who know the sector well.

After bootstrapping for two years, Axon Group led [13] a seed round of $1m in April 2014, Hot has since added another $1m in funding through Business Angels in Ireland as well as soft loans from ENISA [14] and Emprendetur [15].

The full list of companies in Techstars Boston Class of 2015 is here [16]. 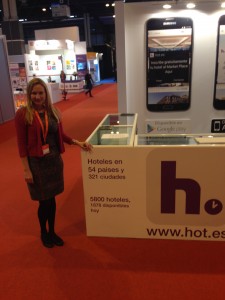